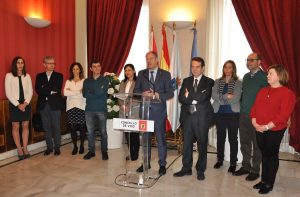 The Iberian Seminary of Marine Chemistry, the Encounter of Physical Oceanography, the Toxic Phytoplankton Iberian Meeting, the International Science Conference of the Campus do Mar, the Cíes Heritage Workshop, the International Symposium on Marine Science, ISMS 2018, will gatherin Vigo, between June 20 and 22, about 400 participants with the aim of bringing together all scientific knowledge of international interest in the field of marine sciences. The sixth edition of the ISMS, which will also serve to the undergraduate, master’s and doctoral students to present their first scientific work, was presented this noon at a ceremony, in which the rector of the University of Vigo and the mayor of Vigo highlighted the relevance of the event, which rector Mato defined as “the congress of congresses”.

Dean of the Faculty of Sea Sciences of the University of Vigo, Belén Rubio, who, together with his counterparts from the universities of Las Palmas de Gran Canaria, Cádiz, Valencia, Alicante and Barcelona is in charge of organizing this event, remarked that this symposium “is the only one in the field of marine sciences that is held in Spain and in which the six universities where this degree is taught are represented,” explained the head of the center. She was accompanied in today’s presentation by the director and the head of Talent Recruiting of the Campus do Mar, Emilio Fernández and Elsa Vázquez respectively, as well as representatives of the Spanish Institute of Oceanography and the Institute of Marine Research – CSIC, who, together with the Vigo City Council, collaborate in the organization of the international symposium to be held at the Mar de Vigo Auditorium.

“The symposium represents a meeting point between researchers who work on the progress of the different disciplines that make up the marine sciences and supposes a thorough and rigorous analysis of where actions should be taken to take advantage of the potential that oceans have for growth and development, with particular interest in the coasts, due to the high population density that is in them, “said Rubio, who highlighted the great multidisciplinary nature of the thematic areas that will be addressed in different conferences, ranging from ocean modeling to the health of marine ecosystems, marine geology and the conservation and management of living and geological resources, passing through the technologies for the observation of the oceans.